To explore the idea of creativity as a collective and networked process that involves people and technologies, we created an online resource to crowdsource examples of “Mobile Networked Creativity” from around the world. Our goal is to decolonize traditional ideas of creativity, by building a crowdsourced repository of creative practices that emerge from a process of survival.

We developed the repository’s format to accomplish four main goals:
(1) explain Mobile Networked Creativity for a broad audience;
(2) share existing research and materials about this topic;
(3) ask the audience to contribute to the collection; and
(4) display the crowdsourced examples we get from the public.

The Retro Mobile Gaming Database (RMGD) contains a collection of mobile games from 1975 to 2008. This database allows users to search games by multiple search criteria including title, year developed, type of game, and more. This robust search system will help researchers not only to find games but also to create new correlations among historical types of mobile games. 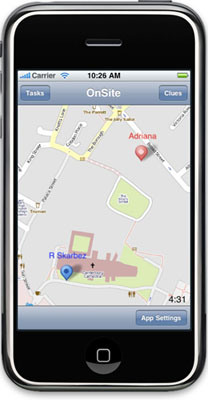 OnSite (2009) explores the construction of Hybrid Reality Games (HRGs) for entertainment and educational purposes. HRGs are location-based games that take place simultaneously in two spaces: a digital online space and a physical environment. Equipped with GPS-enabled mobile phones, players in a pre-chosen physical location access location-based information about that space and interact with online players through text messages and voice communication. At the same time, online players track the real-time movement of physical players on an online map that represents the physical location while communicating with the players in the physical space. The collaborative and real-time coordination of HRGs make them especially suitable for educational contexts, as well as other situations that require remote and local networked interaction.

Joyce Rudinsky, domain scientist for the arts and humanities at the Renaissance Computing Institute. 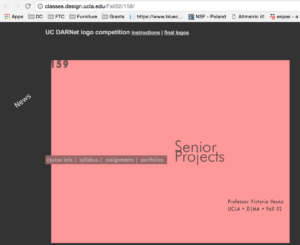 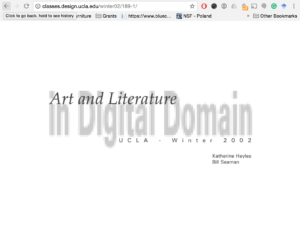 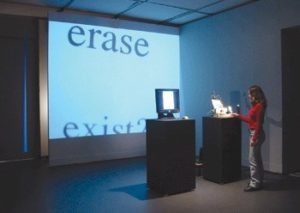 (2001) is an electronic reading device that deals with the inversed functionality of three technologies: a printer, a video camera, and a database. As such, it raises issues about the erasure of text, the act of reading in real time (i.e., listening to a printed text), and physical databases. We challenge the idea of the database as a non-linear and digital structure and the printer as an output device as well as an information recorder. Our aim is to question the traditional meaning of computer interfaces. We achieve this by inverting their basic functionality. The installation deals with the opposition between presence and absence, recording and erasing, memory and forgetfulness, present and continuous time, reading and listening. These concepts are connected with the idea of present time as a time that is always passing by.

In collaboration with Fabian Winkler.

110110101 (2002) is a collaborative project formed by four cars equipped with infrared lights and walkie-talkies that run on Los Angeles’ freeways – the 101, the 10 and the 1. We compose a four-car group, which acts like a conscious OI (organic intelligence) intervening in the freeway space. Our goals are to address cars as cellular automata – programmed isolated entities – as well as to visualize invisible and hidden networks. The first part deals with freeways as (non) places in which people do not communicate consciously. They are isolated in the interior of their cars. Therefore, the traffic pattern can be considered analogous to an automata behavior, somehow following a predetermined set of rules. In contrast to cellular automata, however, we subvert the logic of traffic by creating intentional and expected patterns. We also network with each other via walkie-talkies. In addition to our conscious network, there are hidden networks on the cityscape, which we are not aware of. Hence, the second layer of this project deals with the visualization of such networks through infrared lights. The infrared light network is invisible to the human eye, and is used as a marking and communication protocol among the group. This “hidden” action is intended to expose the many connotations of networks in the city space.